I can not see certain objects in delphi

Hi, I'm editing a small graphic application to collect different files in delphi but something strange happens to me. The application looks like this:

But when I compile and execute it suddenly the objects in the corner disappear and I do not know why:

Here is a picture of the features: 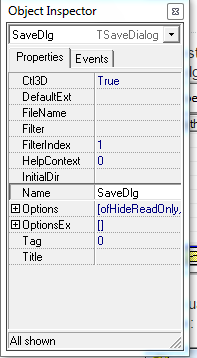 Those 'objects in the corner' are components of Delphi, no controls.

Technically, components provide some functionality, such as runtime information about their type and internal functions, making it easy to work with them. No support direct interaction with the user, nor can they be displayed on the screen.

The controls, on the other hand, inherit from the components; A control is a component. They allow to work with them just as easily as with components, and, also , they can be displayed on the screen and interact with the user. Technically, the controls respond to system events, including the redrawn .

So, why do they show up? Because, during the development of your application, Delphi takes advantage of that functionality offered by the components to allow defining, graphically (through its window) of properties) the initial attributes of the component, to save you doing it by hand in your code (which, on the other hand, you can always do).

As they are not controls , they have no visual representation and your application, during its execution , does not show anything about them.

How are they used? depends on the component . Some, like the 'TSaveDialog', have the method 'execute'; others, such as the 'TTimer', are executed while they are active and have a valid 'OnTimer' property.

Finally, the components , during their normal work, can show certain controls . The 'TSaveDialog' will show a dialog to select files; but the dialogue itself is not the component , it is an independent entity, created and executed by the first.