I am working on postgres and I would like you to help me add a column several times with different conditions for example I have my column days that are arrears of credits and the capital column that generates a credit, I need to group them as the table where they are grouped by greater than X days. 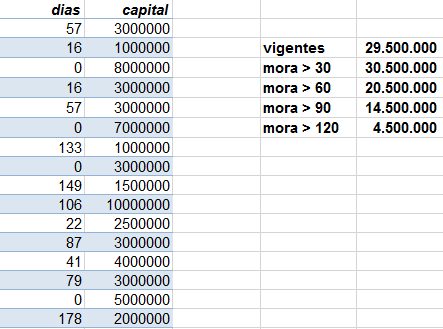 I will take your simplified example to illustrate how it can be done.

The idea is to use an expression CASE . But be careful, that the order of the conditions is important. Conditions for higher amounts must appear first. Otherwise, almost all quantities will be added under dias > 30 .

Additionally, instead of translating the conditions of CASE directly into text, I translate it into a logical ID that can be used later for ORDER BY :

answered by 21.12.2017 / 14:31
source
Problem with value that Ajax returns when sending mail, even if it is successful Function MYSQL - IF