Spring and maven in java

I'm starting to read about spring framework, where in the course they use maven and there are already things that I do not understand, which some do not have to do with spring or maven, but more with java.

Well, the first thing is, maven, by adding a dependency to the pom.xml file, I automatically download the library (the classes) to my project?

The second question comes with this image: 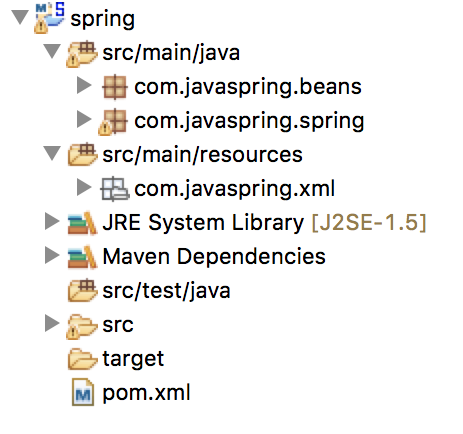 Why do I have so many folders that do not have any content when I do a project with Spring or Maven? (Ex: src-target)

The answer to the first question is yes, maven is responsible for downloading the libraries that you declare as dependency for your project only if these libraries are in any of the maven central repositories (see section Approved Repository Hosting) . But maven does a lot more than this. Maven also allows you to download the sources and documentation of those projects (if they are available). Also, Maven will also download the dependencies of the bookstores that you indicate as a dependency. For example, Spring Core 4.2.5 depends on the commons-codec version 1.10 library (as shown in your pom.xml file ), if Maven detects that you do not have that library installed locally, then it will download it for you.

In detail, when you declare a dependency on Maven, you will do the following:

It should be noted that Maven will use the downloaded libraries to compile your project. This DOES NOT mean that your final artifact will contain the dependencies embedded in it. This depends on the type of project and some additional configurations that you can do in Maven. For example, if your project is a jar type, Maven by default will not add any dependency on the generated jar. However, if your project is a war type, Maven will by default add the dependencies within the WEB-INF / lib folder (Java web application standard).

The second question is answered and well detailed in Introduction to Standard Design of Maven Directories (link in English). Anyway, here I give a detail for the folders that you have in your project according to the image that you have shown:

Additionally, Maven by default will make your project use Java 5 (as shown in the image, your project uses Java 5 or J2SE 1.5). To avoid this and use your favorite version of Java (6, 7, 8, 9?) You must add a plugin under the build section in your pom.xml file:

Keep in mind that <build> and <dependencies> are two separate sections.

First, if you add a dependency to the pom.xml file,   automatically download the library (classes) to my project?

Yes, it is exactly what you do.

with Spring or maven, I have so many folders that do not have any   content? (Ex: src-target)

The /target directory is where the files are created when you build!

Here is a list of directories created by Maven, where you specify what they are for (English):