Is it possible to use docker in windows without owning VT-x / AMD-v?

I have managed to install docker on a machine that is x64 and has Windows 7 Ultimate, however, as a docker is a program that has official support for x64 bits and also uses virtual box I was reading that is necessary for the correct operation that the machine support virtualization at hardware level and in fact when running docker this one throws me a message just saying that the machine does not have support for x64 bit systems. The problem is that the machine does not have this capacity (I have read its technical specifications, I also checked the Bios and if there were any doubts I confirmed that it does not have Hyper-V in the Windows features).

Which leads me to ask if there is any other tool, "workaround" or alternative to run docker in Windows 7 without using hardware virtualization in between.

Observation: I know that switching to Linux is a solution because it does not require virtualization technology at the hardware level, however, it is not an option since the host must be Windows because of the requirements that I have been raised.

Update: At the request of user @Alfabravo I have taken screenshot with the error that shows docker for the problem of hardware virtualization. 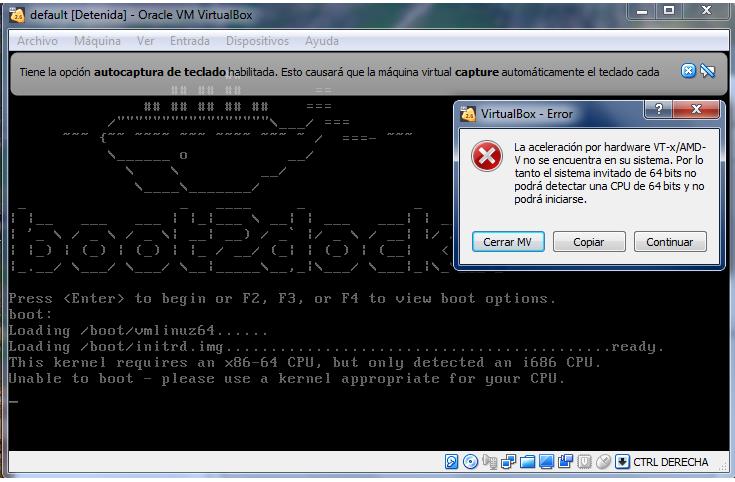 You can confirm if your processor supports virtualization using tools such as for Intel or is for AMD . With that you could see if you need to update the BIOS or definitely not worth it.

It should also be tested if you can use a 32-bit guest, although Docker is supposed to be x64 always ...

Finally, I see that boot2docker was deprecated and I do not see specific requirements of VT-x / AMD-vt. Check your Docker version and try installing Docker Toolbox instead. It could work because they indicate that it is for old systems that do not work with Hyper-V, although in the documentation they indicate that

Make sure your Windows system supports Hardware Virtualization   Technology and that virtualization is enabled.