Understanding the for cycle

When we create a for cycle in any language, sometimes we do not understand the lines and variables that we develop and why we created them.

When we create a start variable (example i ) on we understand that it is the clue (better known as index ) of an array or object.

When we make this sentence (most of the programmers and I include myself) we do not understand.

Why is the sign < in our loop? What logic represents that the variable índice is smaller than the number of times to be repeated?

The two forms will work. but mostly the initial variable of the cycle for is used in 0, this is so that apart from serving as variable iteradora also works as indice to reference fixes positions and since they start from 0. It is customary to start in 0 . Beware that you can initialize more than one variable in this part.

Mostly as in the initialization, the length is placed, that is, the number of times you want the code to be executed or the length of the array to avoid getting an exception of type IndexOfRange when used as an index. But it could simply be a variable booleana and act the same way. (ejm)

This second part always must return a value booleano , true or false

Normally the expression you see in that cycle for is used to traverse the arrays, which does not mean that it is only used for that.

This is because you have to remember that arrays start at position 0 .

Therefore, if we have a i=0 index and we have three elements in our array, if we do the following: i <= length would give us a ArrayIndexOutOfBoundsException in Java for example, since it would try to access the element array[3] which does not exist, in case we want to obtain its value.

The type of cycle for that you present is called for tradicional . According to Wikipedia it was popularized by C programmers.

The diagram of this for cycle can be represented as follows: 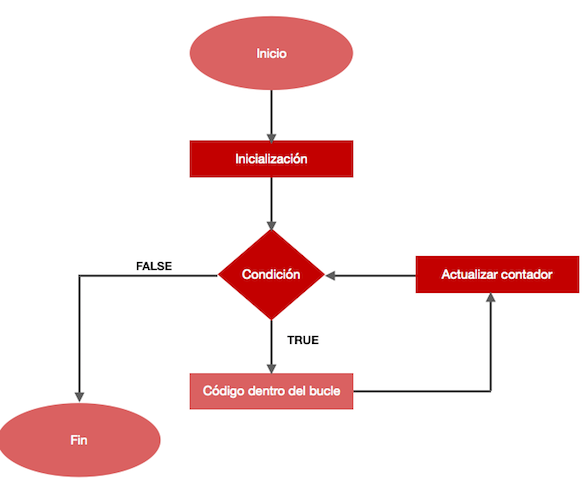 1) let i = 0; //Indica el Inicio de Tu Ciclo , It can be a Local Variable declared within the same For as in this case.

2) i < length; // Una condicional which indicates at what point the For Cycle should be stopped (you can call it if ) while the Condition is fulfilled or not, it will continue to iterate. In your example you are telling him to repeat the Cycle while your variable i is less than length

3) i++) The way you will increase your Variable i in this case 1 in 1 then your variable will start at 0 and if it meets the condition it is fulfilled or not depending on your logic of If it will continue increasing to 1 validate your if and so on ...

answered by 12.02.2018 в 23:28
Send JSON by POST with php to a webservice Is there any way for the user to write text in JavaScript without pop-ups?