I have created an app for a blog feed and even there I do not get any errors. When it comes to testing it compiles well, but when I install it, this window appears:

Even if you have the app uninstalled, click ok or cancel, at the bottom left there is a sign that says: Session 'app': Error Installing APK. The word app is a link that takes you to the Run app window, in which the following appears:

If someone still has this problem, I tell them the solution that occurred to me (after hours of unsuccessful searching). As Android Studio tries to install an APK to run the emulator, it occurred to me to remove the existing APK from the project.

I went to the project folder, where the file "app-debug.apk" is located; (in my case "\ NOMBRE_DEL_PROJECT \ app \ build \ outputs \ apk \ debug"), and to not lose any data (since I'm new to this), I modified the file "app-debug.apk" to "app-debug" .apk.txt "(so that Android Studio does not recognize it and try to install the APK again). Then I closed the emulator, and I gave it "Run" again. The first one did not work very well, since I was installing the APK while running the emulator, for which I had to close the emulator again, and run it again. Now it is working without problems!

I am working with the following configuration: My AVD is a Nexus 4 running Android Oreo (API 27), whose graphical configuration is "Software - GLES 2.0" (by default, when installing AS it comes as "Automatic", and that generates other problems when running the app). Also I am in a Windows 10, using Android Studio 3.1.4.

I hope someone will be of help!

The error you describe:

can have multiple causes, it seems to me that the most common is the use of "Instant Run", disable and upload your .apk to the device or emulator again: 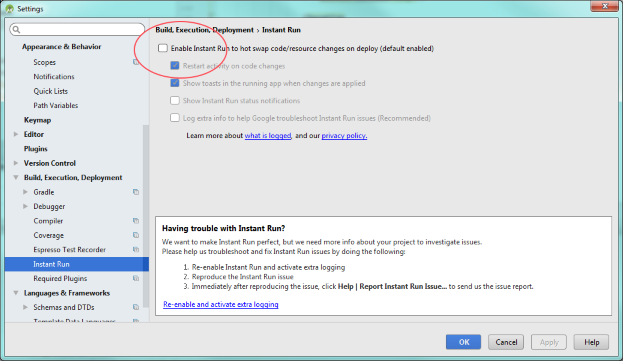