How to solve the blockade of port 80?

Hello everyone I am new to web programming and like many people before uploading a web page you do tests in local, I use Xampp and until yesterday it worked perfect until today I tried to open it and it came out:

Apache: Problem detected!
Apache: Port 80 in use by "Unable to   open process "with PID 4!
Apache: WILL NOT start without the   configured ports free!
Apache: You need to   uninstall / disable / reconfigure the blocking application
Apache: or   reconfigure Apache and the Control Panel to listen on a different port

I've been reading and a solution is with CMD net stop was /y , but it does not work or I do not correctly if any can help me: '(, use win8.1 x64 in AMD, thanks in advance.

The first thing is to use netstat and a few parameters from the console in windows ( -o shows the PID, -a all connections and -n ip addresses)

Then we already know whether or not it is in use .. right there with the parameter -o we can access the no. of process or PID .. already with that data we can open the task manager, that would be enough to know his name and kill him if it is what they need .. but if it is a global process and does not appear in the task manager, there is no another more than to continue using the console to find out where the hell the application that uses the port they need came from.

Well, the next thing is to know the name of the application that owns the process and for this we use the tasklist command with another pair of parameters ( -svc to get the name of the service, -FI to apply a search filter )

To finish we will use the command taskkill sending as parameters -F to force the closure of the application and -PID to specify the number of the process to kill.

You would do exactly the same thing but with the process that is using port 80 Ref . 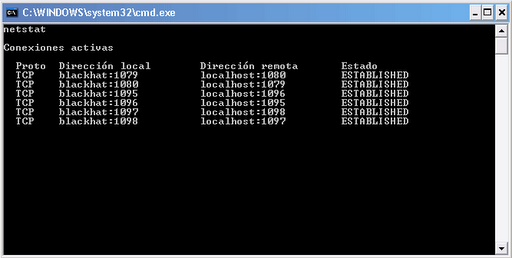 Port 80 is the default port for the server to receive HTTP communication. Apparently you have another server installed on your computer that already uses this port. You have two options:

If you are in a controlled environment, say your personal work computer, and this is simply for learning, you can use the first option if you do not need the other application, and if you want both to live together you can use the second option. If you are in a slightly controlled environment where you only have control over Apache, I recommend the second option. If it is a production server, I would ask why you have another application that already listens to port 80 and would analyze the situation.

As you have already been told, you have the port blocked because another application is using it. You can try to change the port in the configuration of XAMPP (or apache in its default) and / or search through "netstat" the application that is blocking it. In my case, it was that apache had not been closed when I ordered the shutdown for Xampp control, and I had to restart the computer. (You will have restarted, right?)

answered by 03.03.2016 в 11:16
How to traverse array values after inserting a value in a busy place Doubt with the syntax in CodeIgniter