Good practices of use of Database and String.xml

A database with several tables . One of them for example transporte with the following attributes:

At first the application will be available in two languages.

Otherwise the database should have one field for each multilingual attribute. For example:

But this second case I think complicates more the app because depending on the current language of the user will be made different SQL queries.

What is the best practice to develop in this type of case?

As an example I have put the content of 1 tabla of the BD but it will contain several relational tables. That's where the doubt comes from. To carry out some tasks, it will be necessary to consult the BD with its inner join and other commands.

If it were only about locating the user interface, Android already has support for localization using resources such as strings.xml

But nevertheless, from what I understand, you need the data that you store in your database to be searchable. In this case it is best to have a multi-language scheme in your BD.

This way in the main table you would have the primary key and all those attributes that do not vary according to the language, such as prices, quantities dates, etc.

In an intermediate table between the main table and the language table you will have one row for each transport-language combination that contains the data that does vary by language, in your case Nombre and Descripcion

To enter context, if you use strings.xml files defined for a language, you do not need a database to store some information, unless you want a different schema than the localization one.

I think that in this case you should take advantage of the support with which Android account to change the information of your UI based on the language configuration. The localization scheme requires that you create folders and files containing the text and its identifier in different languages as required, which will be supported by your application.

For example, if we assume that our application supports English, Spanish and Romanian languages, we should have the following folders ....

The default text folder would be:

The folder to add the texts in English:

The folder to add the texts in Spanish is:

The folder to add the texts in Romanian:

You would have something similar to this in your project: 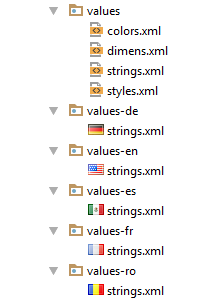 Simply those descriptions defined in your strings.xml use them where required in your application:

The great advantage is that automatically, depending on the language defined in your operating system, it loads the texts defined in the file strings.xml of the corresponding language. 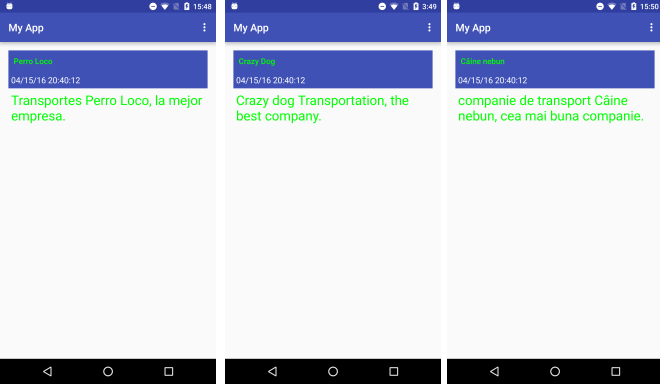 My point of view regarding your questions:

I do not think it convenient or necessary to combine the use of a database with strings.xml in this case. If you choose to use a database, you would use the same scheme used by "Android Localization". The database would contain tables texts and texts, which would contain the same field names.

You simply decide which table to take the texts and the code needed to display them would not have to change.

I consider it a greater advantage instead of a single table with different field names:

That in code you would have to validate in which field to use, it would become unnecessarily more complex if in the future you had support for other languages ...

Do I save the name of the variable that will be stored in the file?   string.xml of each language?

It is not necessary to save the name of the variable in a database, the variable is the same within the strings.xml, but the content in each file would be in different languages.

In this case, the advantage of using Strings.xml over a database is first of all the quick access to them through the R class and the code needed for the implementation is minimal.

There is also the option of integrating multi-language into a database, implementing the technique used by the Wordpress QTranslate plugin

In the fields, where you need to have them in more than one language:

For each language to be included, you can include it and identify it:

The following function is used to extract a string with a specific language.

Its use in PseudoCode

answered by 16.04.2016 в 13:53
Materialize - Implement "materialboxed" class in a link Send mail and attach file with a web service