How to Group Attribute in a class with C #

I would like you to help me I have 3 instances of a class that have the attributes period, soles_vac, dollars_vac, expenses

I did it with linq through a groupby but I did not get what it required. 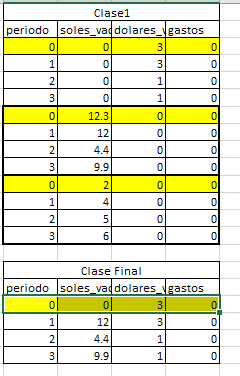 I propose that after the grouping you validate item by item the values you want to obtain.

Within the foreach you can add more validation rules, for example if you only find a period or if there are more periods.

In the code fragment that I'm leaving I'm assuming that Periodo is an integer and that Soles_vac and Dolares_vac are decimals.