Why the oracle power function returns a 1 in the following statement: 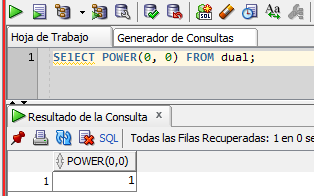 As I understand this it should be an indeterminacy since 0 ^ 0 is equivalent to saying 0 ^ (nn) , assuming n an integer positive ( n different from 0 obviously), which can be converted to 0 ^ n / 0 ^ n which is equal to 0/0 , that is, a mathematical indeterminacy.

There is an interesting post at Math Stack Exchange in which something similar is asked, why is 0 0 = 1? And in which you can find multiple answers with explanations related to algebra, numerical calculation, set theory, discrete mathematics ...

And there is a short answer that may go unnoticed, but that explains why Oracle returns 1 when POWER(0,0) is done. It's the kcrisman answer (my translation):

I am surprised that no one mentioned the IEEE standard for 0 0 . Many computer programs will return 0 0 = 1 for that. It is not a mathematical answer in itself, but it is important to point it out for the increase of the computational nature of modern mathematics, so that nobody gets confused with anything.

On the Wikipedia page linked by krisman, the following is specified on the 754 standard and its application in the programming languages (translation of the site in English, this part is not available in the Spanish version of the article):

Most programming languages with a power function are implemented using the IEEE pow function and therefore evaluate 0 0 as 1. The most recent C standards and C ++ describe this as the behavior as a rule. The Java standard imposes this behavior. The System.Math.Pow method of the .NET framework also treats 0 0 as 1.

If you want more reference, this is the Spanish Wikipedia page on the IEEE 754-2008 standard , and the standard document (in English, in PDF).

Also, on this page of the documentation Oracle for Java , explains how the powers and special cases are calculated, the first special case being: " if the second argument is a positive or negative zero, the result is 1.0 " If Oracle applies the same calculation criteria for Java and for the database, then it is really that the power is not calculated, directly when seeing the second argument as 0, it returns 1 without stopping to check which is the first argument. p>